Supervision of children improving the living conditions of affected children. 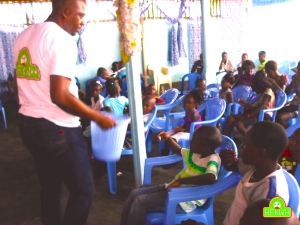 Why the event of Hope For Kids Without Hope Foundation?

Kinshasa is our most recent initiative in the Democratic Republic of Congo. In this large city, thousands of street children and other vulnerable children face a tough existence on a daily basis.
Social problems and poverty driving thousands of children away from their families

Kinshasa is the capital and by far the largest city in the Democratic Republic of Congo. It is located on the Congo River directly opposite Brazzaville, which is the capital of the neighboring Republic of Congo. In little more than 100 years, Kinshasa has grown from a fishing village to an urban area populated by up to ten million people. It is a major cultural center and a very important city with a large industrial sector.
However, years of corrupt leadership followed by civil war and a long series of conflicts have scarred the city. During times of conflict, many sought refuge in the city, and this put a great strain on infrastructure and turned the city into a crowded place with lots of social problems.

There are thousands of street children living in Kinshasa: these Congolese street children are often referred to as “shegues” and their numbers in Kinshasa are estimated to be as high as 20,000 but could be even higher. Whether they are orphaned, or forced to live on the streets as a result of a poor or troubled family background, they all face a tough life. They have been ill-treated by the authorities and the population alike, and often their only chance to survive is begging, prostitution, petty crime or child labor. To make matters worse, the streets have become increasingly unsafe following wars and armed conflicts that have brought firearms and violence to the streets.
Extreme poverty is often directly or indirectly the reason why children lose parental care. Some families simply don’t have the money to feed their children, and overcrowded urban areas do not provide the opportunity to grow one’s own food. Children whose parents suffer from HIV/AIDS or oth
er illnesses account for another large group of vulnerable children at risk of losing parental care since medical treatment is not widely available for the poor. Unfortunately, in Kinshasa children are often accused of witchcraft and they are blamed for the family’s tough living conditions. Such accusations often drive children away from their homes and into the streets.

Breaking a vicious circle by strengthening vulnerable families
Unemployment and illness are some of the biggest threats to family stability in Kinshasa, as they result in deep poverty. Furthermore, if children have no access to schools they have little chance of escaping the poverty they have been born into. Consequently, providing vulnerable families with support and helping them reach health services and acquire job skills are vital steps towards reducing the number of children left to fend for themselves. By strengthening vulnerable families in all areas of life, it is possible to prevent them from breaking apart and this ensure that more children can grow up with their families.

What we do in Kinshasa In Democratic Republic of Congo

HFKWH Foundation started its programmes in 2013 and strengthening local families through our social groups events and activities. More than 100 children from primary school ”Benedicte de la fontaine”, on the outskirts of Kinshasa, are helped to access basic services such as schooling supplies.

Our program in Kinshasa was expanded and now we help families, a primary school and we want to create create a sewing machine centrum for young girls and street children. We are for a solution, we want to give jobs to this children and a better future to this children.

Get involved
If you are interested in helping street and homeless children, you can volunteer to work in Hope for kids without hope programs, or donate funds or supplies to our organization that to help street youth. You can also participate in our actions and assist street children. Finally, you can raise awareness of this issue by educating yourself, your peers, colleagues, students, teachers, family members, and others around you interested in this issue.

Hope for kids without hope

Got something to say? Go for it!